Alright, I should preface this post on the Magpul Bipod by saying that I do own several pieces of Magpul furniture and accessories. Magpul Industries does a great job of designing well thought out products for a wide range of users and environments. It is for this exact reason that I had high expectations when I first heard about their Bipod. Like many people, I was eager to get my hands on the product as soon as it hit the market.

Rewind to the fall of 2018. I finally had a chance to place an order for the bipod through a local distributor. The product has been quite popular as stock seems to be flying off the shelves as soon as it lands. If anything, this only further speaks the loyalty of Magpul’s customer base. With my Stag 10 rifle almost complete, this bipod will make a great addition to my build.

Hey, I like the new packaging, but that’s not what this is all about. 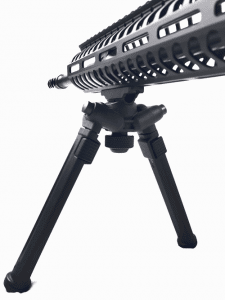 So, here it is. Look, there are plenty of things to like about the new Magpul Bipod. For one thing, I do appreciate how compact it is. There are no unnecessary parts, and the ergonomics are excellent. Everything I need to make adjustments to height, pan, and tilt are accessible with one hand. And having the ability to pan +/- 20 degrees as well as tilt +/- 25 degrees is a nice feature. This allows me to keep my eyes on the target while adjusting the tension for pan and tilt to get an optimal, stable shooting position. I’ve found that with other bipods, I’ve had to add  additional parts to use the tilt function while in the shooting position properly.

At roughly just over 11oz as stated on their website, this bipod weighs slightly less than my HBRMS. Now, I’m trying really hard not to make a straight-up comparison to the Harris, because I don’t think it’s an accurate comparison at all. Other than overall weight and general price range they are different in many ways. The Magpul Bipod provides more functionality in a much more compact design than other products in its price range. There is, however, one thing that I can say that I’m not completely happy with on Magpul Bipod, and that is, the amount of play and rattle it has.

Look, this may sound a bit nit-picky to some, and that’s fair. Now, before you roll your eyes and walk away. To those people I will say, it comes down to your tolerance for what you feel is an acceptable amount of movement. Also, take into account the application in which you are using the bipod for in the first place. I’m not a product designer, but I can say with a certain amount of confidence, that if additional steps were taken to reduce the rattle and movement, we’d end up with a heavier and bulkier bipod defeating the very purpose of its compact and ergonomic design.

The fact is, this bipod has more good things going for it bad, and I didn’t set out to write a negative review by any means. As previously stated, this is just one man’s honest opinion. Take it or leave it, my feelings won’t be hurt if you don’t like what I’m writing. I do not doubt that Magpul will continue to innovate and improve on their original design, much in the same way they’ve done with so many other products. All you have to do is read the Magpul mission statement to understand their philosophy when it comes to good product design. For a full breakdown and specs on the Magpul Bipod visit their website here.

Of course, feel free to share your experience with the Magpul Bipod in the comment section below. Or, help us grow our social media following on Facebook, Instagram, and Twitter, as Magpul pointed out, it’s somewhat lacking at the moment. Cheers, Josh

I'm a dedicated firearms enthusiast as well as an advocate for firearm rights. I have a great appreciation for quality gear, be it firearms related or hunting/outdoor equipment. This site intends to share my personal experiences with you as I explore various gear-related topics. I hope you find this site somewhat useful. I'm always happy to get feedback, so feel free to reach out.