Sometime in the early days of the pandemic, I was feeling cute, so I decided to dump way too much money into a Ruger 10/22 takedown build. I joke, but if you replace all the Ruger components in a rifle, can you still call it a Ruger? In this case, the answer is yes. I’ll explain why that is a little bit later in this post.

While I own other 10/22s, I liked the idea of the takedown model. And I was even more excited to do a project using the Magpul X-22 backpacker stock. So off I went, searching the interwebs for parts I wanted to incorporate into the new rifle build.

Unfortunately, as a Canadian, I do not have access to many aftermarket parts and retailers as any of our Brothers and Sisters south of the border. So, often we have to make do with what is already in the country or pay extra fees to import (usually not worth it).

And that’s not to say that we don’t have some fantastic gun stores here. We do! In fact, we have at least one company I know of that manufactures aftermarket, 10/22 platform compatible parts here. It’s just that sometimes specific stock is limited, and the shops only import what they know will sell quickly. And that usually means you must act fast if you want to score some of those coveted parts for your new build.

In this article, I’ll list all the components that went into the Ruger 10/22 Takedown build and where I sourced the parts, accessories and gear.

Since I already knew I’d be swapping out most of the original Ruger 10/22 Takedown parts, I certainly didn’t what to go out and purchase a brand new 10/22 takedown. However, I should have thought this through just a bit more. Did I actually even need the original Ruger components?

Not so much, no. As I dug a little deeper (after ordering my used takedown), I got my mind set on doing this build based on the Tactical Solutions Receiver. But as it turned out, and as I mentioned earlier, certain parts can be challenging to source here in Canada. As a result, I could not get my hands on the TacSol receiver I wanted.

Therefore the original Ruger receiver was still necessary for this rifle, saving a good chunk of change. (as if any of this was about saving money).

One thing was sure in my mind: I wanted to do my Ruger 10/22 takedown build on the Magpul X-22 Backpacker stock. I think it’s really cool what Magpul did here. The X-22 Backpacker stock alone is an excellent upgrade to the 10/22 Takedown. In addition, Magpul brings modern design with better ergonomics and more features to the table, enhancing the overall form and function of the 10/22 takedown platform.

At this point, I started to receive some of the items I had ordered. The Ruger 10/22 takedown had arrived from Select Shooting Supplies, and the Magpul X-22 Backpacker stock was en route from Wolverine Supplies. However, I still needed to source a new Takedown barrel, trigger group, optic, and a few misc parts for the old receiver. 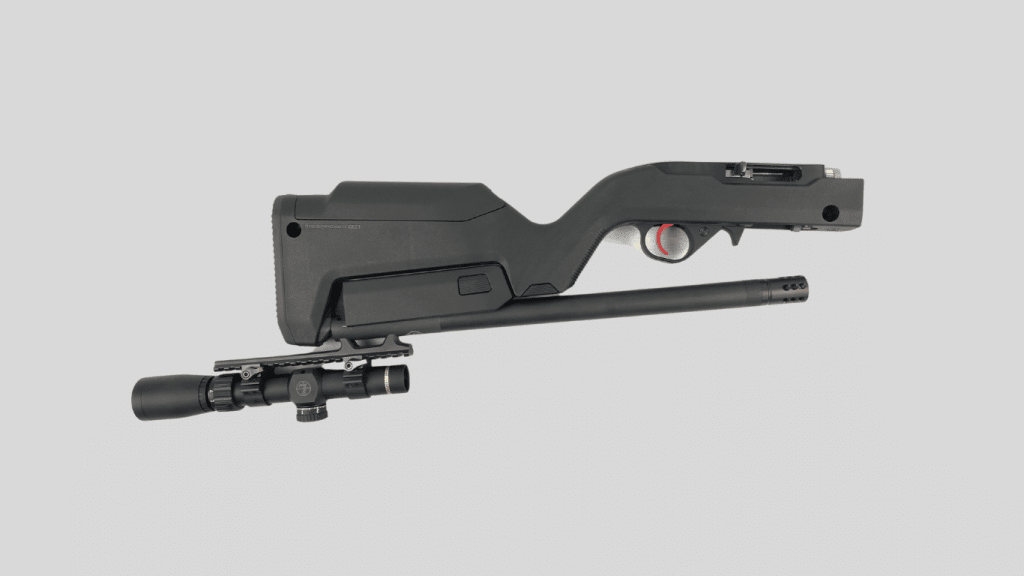 When researching barrels for the takedown, the options were somewhat limited. But, unfortunately, that is just how it goes. So with that, and seeing as the TacSol components were largely unavailable then, I opted to go with the Adaptive Tactical 16″ Tac-Hammer Barrel. If I remember correctly, I ordered the barrel from Red Deer Shooting Centre.

In choosing the Adaptive Tactical barrel with the cantilevered rail, I could attach the optic directly to the barrel instead of the receiver. In theory, that will help to keep the rifle zeroed, given the nature of the takedown platform. At least, that’s what I’m telling myself.

However, it would be interesting to see if anyone has tested to see if there is any notable point of impact shift after repetitive disassembly and reassembly with an optic mounted to the receiver. I guess it’s an easy fix with the takedown adjustment ring.

With the barrel swap complete, it was time for me to mount the optic. I could have given a little more consideration at this point in the build. Initially, I thought I’d mount a simple red dot optic and be done with it. However, at the time, I was also sourcing a scope for another build I had on the go. 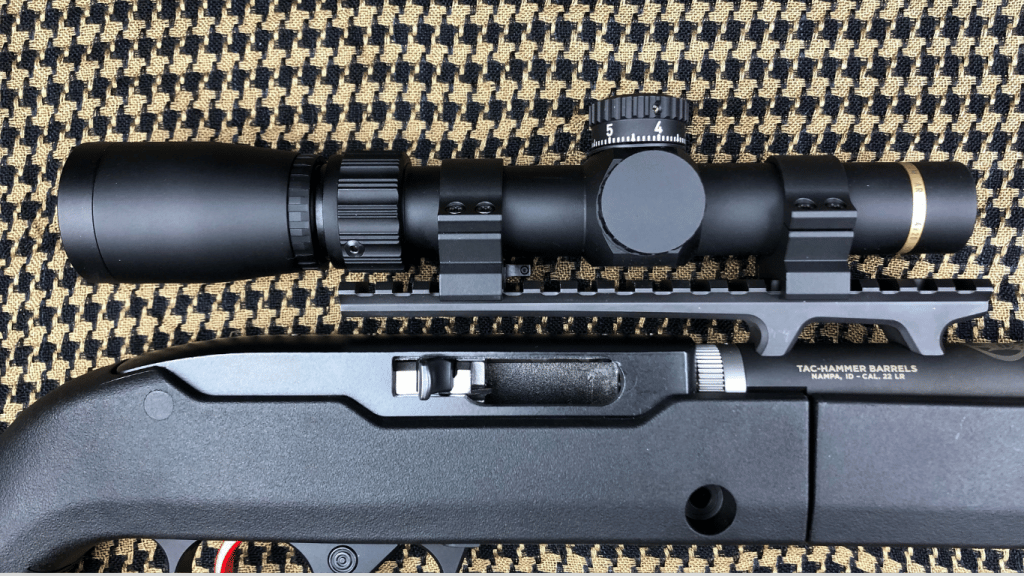 So I picked up a Leupold VX-Freedom AR 1.5-4×20 and 1″ Leupold QRW2 Riflescope Rings. Again, this scope was intended to go on another rifle build. However, I ended up mounting on my Ruger 10/22 Takedown.

It’s a fantastic scope, no doubt, but it’s way overkill for this 10/22 build. Furthermore, when the scope is mounted to the barrel, it is not as compact as I’d like and does not fit so well in my 10/22 takedown backpack. 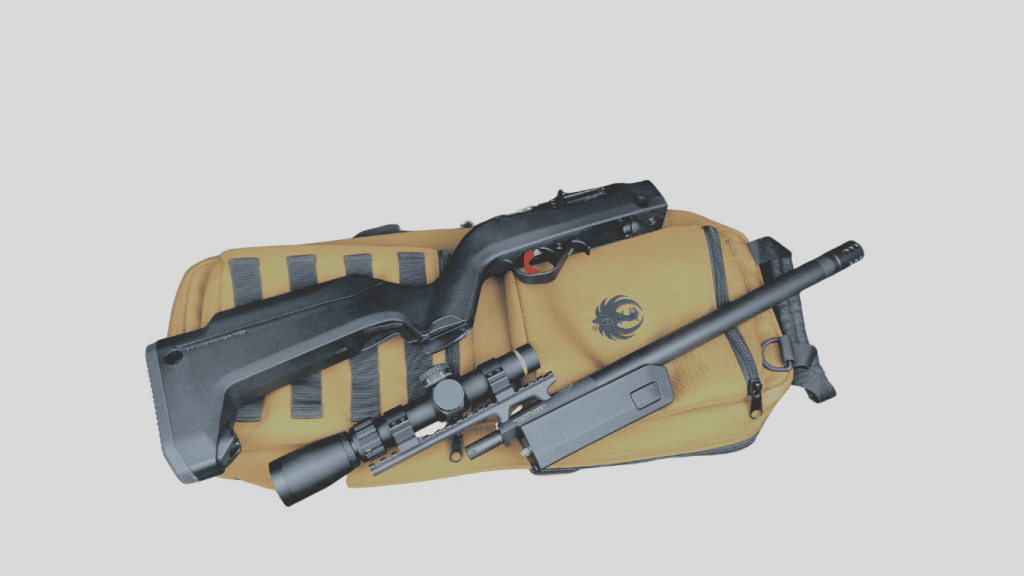 At some point, I plan to try a few different red dot optics with this build and choose one I like. I may even try to locate one of the TacSol barrels with open sights and a second Magpul X-22 Backpacker foregrip so I have an alternate barrel configuration on hand.

One of the final upgrades I did in this build improves the Ruger 10/22 takedown accuracy. Of course, I’m talking about the Kidd 2-stage trigger unit. If there was one single upgrade I would ever make as a suggestion, it would have to be a drop-in trigger unit. 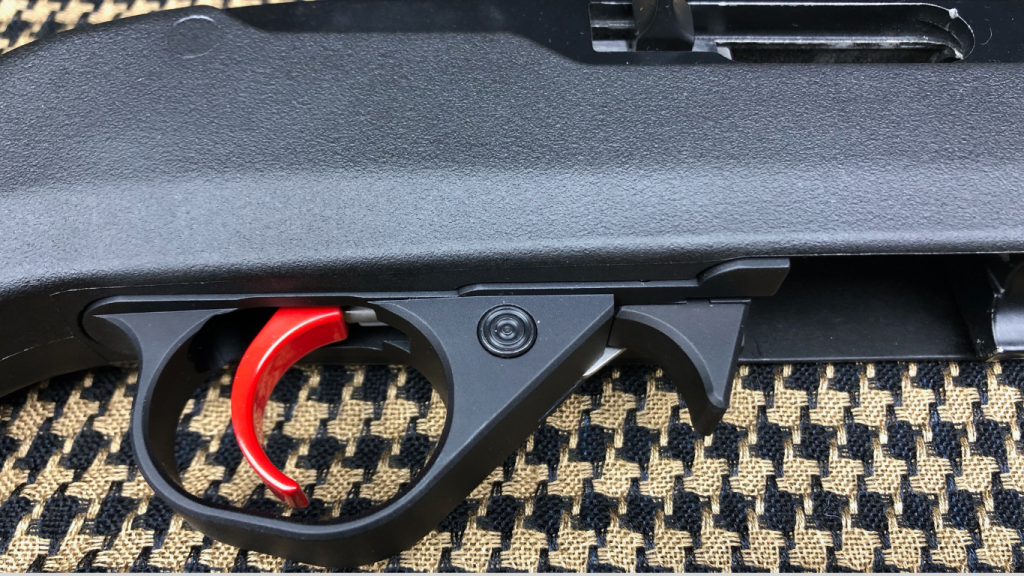 The factory 10/22 trigger is not horrible, and with practice, the 4lbs trigger is perfectly reasonable. That said, the difference between the factory trigger and the Kidd 2-stage is quite noticeable.

The drop-in trigger unit is set to 8oz/8oz for both trigger stages, which is a massive difference from the 4lbs factory trigger unit. In addition, the Kidd trigger includes an auto bolt release already installed, which makes dropping the bolt a lot smoother. And while I was at it, I tossed in a new Kidd bolt buffer since I was already placing the order through Dlask Arms Corp.

My final thoughts on the Ruger 10/22 Takedown build

I had a lot of fun on this build and learned a few things I would do differently next time. However, one Ruger 10/22 takedown is probably enough for me. This is a perfect little backpacking rifle and an ideal rifle for hiking and camping edc.

There is always the option to set up an additional barrel assembly with a different barrel configuration. And like I said, swapping out the scope I’m currently running will likely happen sooner than later.
I think what I’d like to do next is to build a 10/22 on the Magpul Hunter stock and start the build using a TacSol receiver or consider doing a .22 bolt action build. Either way, I’m happy with this build for the most part and would love to hear what you all think of it. Thanks for taking the time to read about my Ruger 10/22 takedown build. 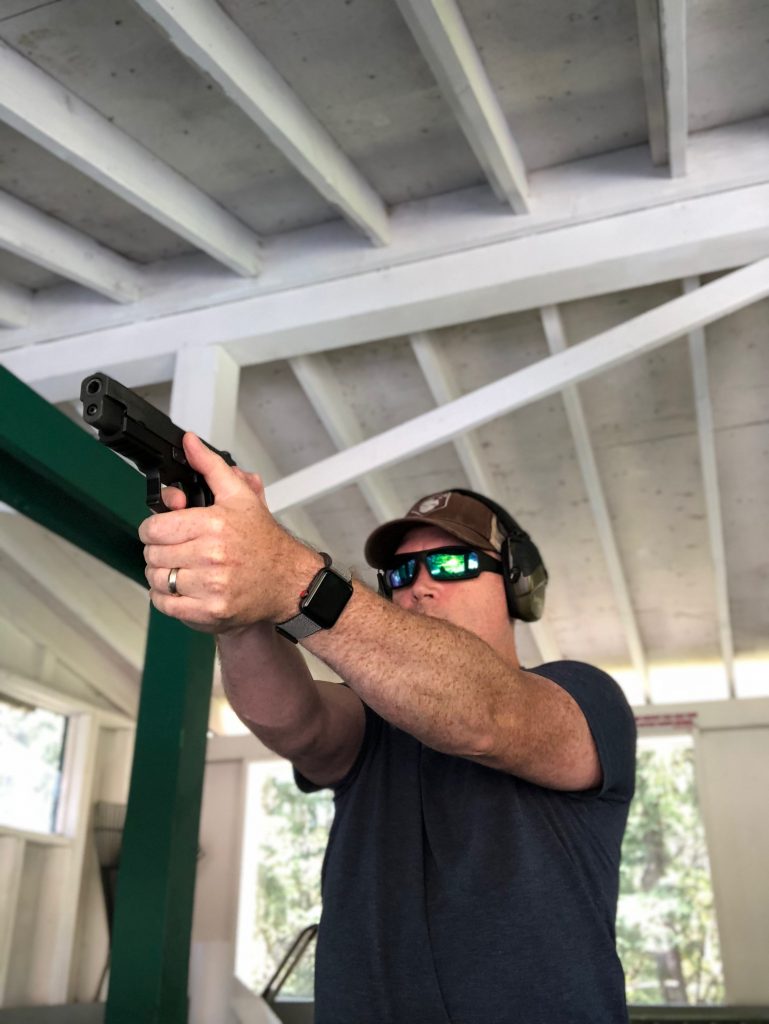